Thanks to the generosity of many, a headstone for Henry Kirklin at Columbia Cemetery is now in place. On Friday, November 6, 2020, at 3:30 p.m., a livestreamed graveside ceremony will honor Henry Kirklin at his new headstone. Due to COVID safety precautions, we are asking that the public does not attend the ceremony and instead watches from home. The public is invited to visit Mr. Kirklin's headstone at the Columbia Cemetery at any time after the ceremony.

Henry Kirklin, a famous African-American farmer, entrepreneur, and educator, was  buried in the Columbia Cemetery in what was until recently an unmarked grave. A committee came together to raise funds to erect a gravestone at the Columbia Cemetery, where he was buried, to honor Mr. Kirklin's life and achievements. The organizations that worked on this campaign included the Boone County Historical Society, Columbia Center for Urban Agriculture, Sharp End Heritage Committee, University of Missouri College of Agriculture, Food and Natural Resources, and Friends of the Historic Columbia Cemetery. 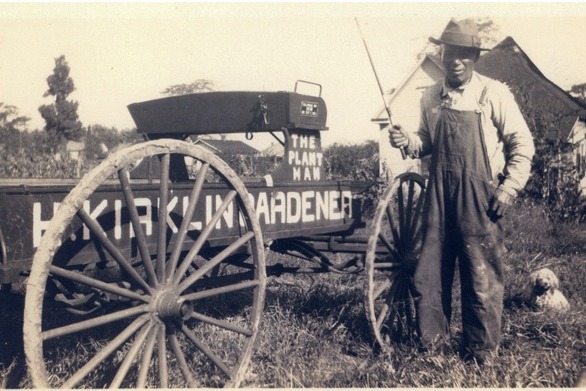 Photo of Henry Kirklin with his produce wagon, which reads “THE PLANT MAN H. KIRKLIN GARDENER” from The State Historical Society of Missouri.

In 1858, Henry Kirklin was born into slavery in Boone County, Missouri, and freed when he was five years old. Kirklin lived in Columbia most of his life. Despite escaping slavery and never attending school, he lived his life as a successful gardener, business owner, agricultural enthusiast, and teacher.

Outside of the University Henry Kirklin was growing food for his farm business. In 1883, Kirklin purchased land on Switzler Street that he used for his home and market garden. He sold, fruits, vegetables, and plant starts around town. Selling at his farm, over the phone, or from his wheelbarrow (and later horse-drawn cart), Kirklin had a reputation for selling only the highest quality produce. 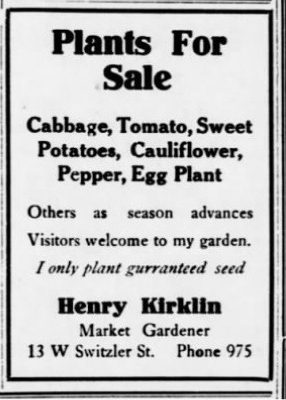 An advertisement from the Columbia Missourian April 22, 1917.

Later in life he won many awards and spoke at conferences across the country. Eager to spread his knowledge, he taught at a vocational school for African Americans in Chariton County, Missouri and informally at schools and fairgrounds across the state.

An old newspaper article published in the Columbia Missourian on March 9, 1928, that said, “Boys were urged to make use of every available space for gardening by Henry Kirklin, market gardener, last night at a well-attended meeting of the Douglass School P.-T.A. The subject of this discussion was the beautifying of back yards, and back yard gardening as a profitable engagement. A course in agriculture for Douglass School is to be urged, using the athletic field as an experiment ground.”

Henry Kirklin was an active member of the St. Paul AME Church at the corner of 5th St and Park Ave. His work would still be considered remarkable, even if he weren’t a former slave in the late 1800s. If you take into account all of the forces working against him during this time, his accomplishments are that much more impressive. Kirklin is a legend when it comes to agricultural education, demonstration, and experimentation in this town. William L. Nelson, a local farmer and politician of the time said of Kirklin, "While denied the privilege of much book learning Henry Kirklin is yet an educated man. The school in which he was educated gives no diplomas, but its course is thorough and the work exacting."

In 1938, Henry Kirklin died at the age of 80, and his final resting place is now being marked in Columbia Cemetery. 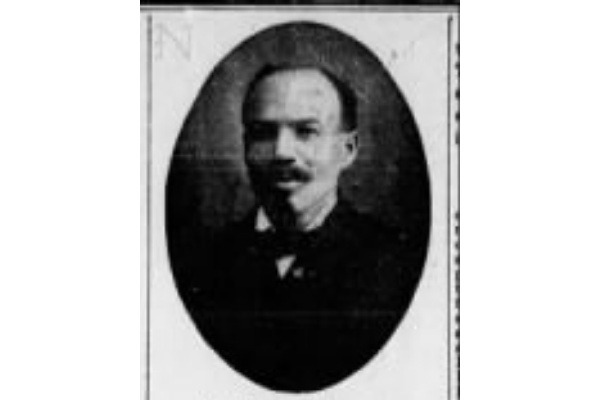 A portrait of Henry Kirklin published in The Professional World on December 25, 1903.

Back to News & Updates